Biologists discovered a new facet of the mechanism of protein biosynthesis 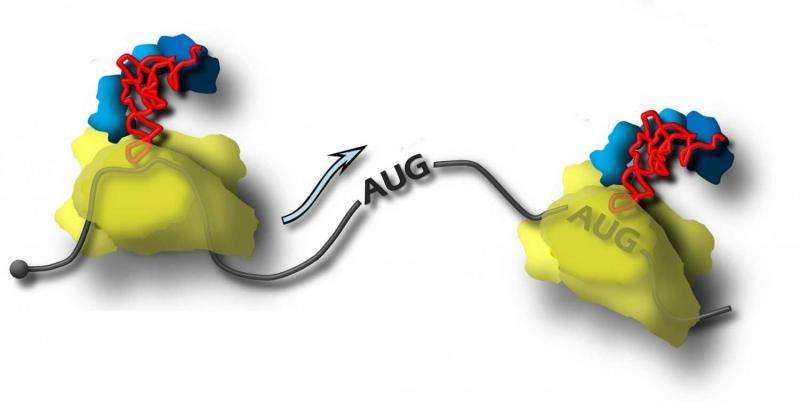 A significant proportion of our genetic information encoded in DNA is expressed in a living cell as proteins. In order to synthesize a protein, this information needs to be converted from nucleotide sequence to the language of amino acids. The process of the decoding is called translation, and it involves the distinct nucleic acid molecule, messenger RNA (mRNA) – the “temporary carrier” of the information, which is a copy of one particular gene. Special molecular machine – the ribosome – moves along the mRNA and reads nucleotide triplets. Each triplet encodes a particular amino acid.

It is challenging that the mRNA nucleotides simply follow one another, and the ribosome must determine the place to start reading. If the first triplet to decode is chosen incorrectly, the ribosome begins to synthesize the wrong protein, which would be useless or even toxic to the cell.

“To solve this problem there is a special mechanism – ribosomal scanning,” says Ilya Terenin, a co-author of the research. “First, the small ribosomal subunit, preloaded with special proteins, binds the end of the mRNA (which can be considered as a “photocopy” of what is recorded in the DNA: it is like a guide for the protein molecule assembly). Then ribosome starts to move along the mRNA scanning the nucleotides like on a conveyor belt. Most frequently, the starting point is AUG (“uracil-adenine-guanine”) triplet. When the ribosome finds one, it stops scanning and starts protein assembly. Previously it was thought that an AUG recognition is the final point of the process thus leading to the start of the protein synthesis from this particular position, but now this doesn’t seem to be always the case.”

When the small subunit meets AUG codon, it may start assembling the protein molecule (initiate translation), or may not. It depends on which set of the helper proteins is available at the moment. These special proteins are termed eukaryotic initiation factors (eIFs). eIF2, for example, is one of the most important factors for eukaryotes (organisms with cells containing a nucleus, including humans). eIF2 brings the first “building block” of any protein – amino acid methionine. At the end of the initiation process, the large ribosomal subunit joins the small one. When all components are in the cell in the enough quantities, hydrolysis (decomposition) of guanosine triphosphate (GTP) molecule occurs, which serves as a signal for the large ribosomal subunit binding and consequent start of translation. GTP molecule is bound to translation factor eIF2, but the eIF2 cannot hydrolyze GTP by itself – and it is time for another helper protein, eIF5, to get up on stage. eIF5 availability is what determines whether GTP is hydrolyzed or not.

“It turned out that if this hydrolysis does not occur, the small subunit ignores the recognized AUG codon and slips down, as if nothing had happened. We called this newly discovered phenomenon “sliding”,” sums up Sergey Dmitriev.

The above can be explained through the following analogy. Small subunit of the ribosome can be viewed as a fidgety younger sister, who wakes up early in the morning and wants to play her Meccano set – to synthesize protein from “building blocks”, amino acids.

Large subunit is her elder sister, who knows the rules of the game and, in contrast to the younger, is able to read the guide for assembling beautiful and complex molecules, but she does not wants get up that early after the previous night party. But she realizes that the younger sister will cry if not to play with her, and recalls that yesterday she promised to join the game, so she reasonably sets multiple alarms (AUG codons).

However, like all the people who set multiple alarms, she rarely gets up after the first ring, thus ignoring the first AUG signal. To make her get up one needs to cook her favorite pancakes for breakfast (hydrolyze GTP), so that their odor would lure sleepyhead from under a cozy blanket. Dad (eIF2) usually gets up early, he has even bought the flour already (bound GTP), but his only cooking experience is boiling eggs. But the mom (eIF5) knows how to cook pancakes, and thus success of the whole plan depends on her.

Thus, sliding is ignoring the alarm. But when all the necessary factors are present, an elder sister wakes up, eats and goes to play (synthesize proteins) with her younger sister.

To recognize, or not to recognize: that is the question.

Interestingly, the start codon in about half of the human mRNAs is not the first AUG from the end of molecule, but it can be second, third and even more remote. Until now, the only explanation for this was a phenomenon called “leaky scanning” – the process when ribosome “passes by” the first AUG codon, not recognizing it. However, leaky scanning requires the first AUG to be in particular nucleotide context and it is not always the case. Scientists have shown that there is another possible explanation: the recognition of these “premature” AUGs is still going on, but after that the ribosome is still able to resume moving and reaches the correct start codon – thanks to sliding.