Can a quirky chromosome create a second human species? 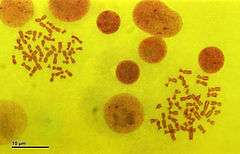 Meiosis is the form of cell division that halves the chromosome sets as sperm and eggs form.

Let’s say a chromosome #22 has glommed onto a chromosome #13 in a man. His sperm can get a normal 13 and a normal 22; just the piggybacked 13;22 like the man himself; or 4 “unbalanced” possibilities that contribute too much or too little of the implicated chromosomes. For a family, that means a 2/3 risk of unbalanced chromosomes for each pregnancy—and loss or a congenital syndrome.

One in 1,000 people has one Rob chromosome, and is a carrier (heterozygote) for it. Robs happen only in chromosomes termed acrocentrics that have one long arm and one very tiny arm, or in telocentrics, which have only a long arm (but we don’t have them). Our acrocentrics are chromosomes 13, 14, 15, 21, and 22. A Rob chromosome 21 accounts for the rare cases of Down syndrome that are not due to a full trisomy (extra chromosome) and are much more likely to recur in families.

OF MICE AND MUNTJACS

Reports of Robertsonian translocations in the animal kingdom are sparse, but mice are curiously adept at shuffling their chromosomes. Their acrocentrics and telocentrics glom into larger metacentrics in many ways.

The first departure from the common house mouse (Mus musculus) was the “tobacco mouse” (Mus poschiavinus), described in 1869 from specimens trapped in a tobacco factory in Valle di Poschiavo, Switzerland. They had big heads and small, dark bodies. Tobacco mice were later found in the Italian Alps and their distinctive set of 22 chromosomes discovered, their 9 pairs of equal-armed metacentrics coalesced from the ancestral 40 telocentrics of the house mouse.

The dynamic chromosome count of mice likely reflects attractions of TTAGAGAG repeats at their tips, which are echoed, but in reverse, at their main constrictions, the centromeres. Such reverse repeats in chromosomes are like Velcro, mixing and matching their parts, creating at least 100 different “races” of mice that are, genetically speaking, distinct species because they can only reproduce with each other. The resulting types of chromosomally-defined mice are geographically fixed, because mice don’t travel much (unless they sneak onto ships).

Muntjacs are also prone to Robs. The ancestral Muntiacus reevesi has 46 chromosomes in both male and female, whereas the derived Muntiacus muntjac has just 6 chromosomes in the female and 7 in the male. Chromosome banding reveals that the two Asian deer species have the same genes, but they’re splayed out differently among the chromosomes. Rams and cotton rats have Robs too.

Big chromosomes shattering into smaller ones, although that seems energetically more favorable than formation of a Rob, is actually rarer. Such chromosomal fission has been reported only in cultured cells, a zebra family, and in the black rat of Mauritius. Chromosome fusion at the tip rather than the exposed centromeres is also rare, but distinguishes Asian river buffaloes from Malaysian swamp water buffaloes.

A NEW BREED OF HUMAN?

Far far rarer than human Rob heterozygotes are homozygotes with two Robs, because these individuals can only arise from inheriting one copy of the unusual chromosome from each parent – which typically means the parents are related and inherited the Rob from a shared ancestor, like a common great-grandparent. Cases of these Rob homozygotes, who have 44 chromosomes rather than the normal 46, are exceedingly rare:

• A 1988 report tells of 3 distantly-related families in Finland, also involving #s 13 and 14, whose Rob chromosome passed in carriers through at least 9 generations, appearing in at least one homozygote.

• A 1989 paper describes a Rob between #s 14 and 21 in a homozygote whose carrier parents were related.

Trickling into the headlines was a case report from 2013 of a 25-year-old healthy Chinese man who has 44 chromosomes because each 14 joins a 15 – a combo not seen before. His parents, both translocation carriers, were first cousins. The Chinese man’s sperm carry 21 autosomes and an X or Y, and he should be fertile – but only with a woman who is similarly chromosomally endowed. Chances are he’ll never find her. But if he does …

FROM SCIENCE TO SCI-FI

The report on the Chinese man with 44 chromosomes ends with: “The aberration can provide material for evolution. … Long term isolation of a group of individuals who are homozygous for a particular Robertsonian translocation chromosome could theoretically lead to the establishment of a new human subspecies having a full genetic complement in 44 chromosomes.”

It might have happened before. Could the 48 chromosomes of a shared ancestor of humans and chimps have branched to yield our 46 chromosomes? Fusion of chimp chromosomes 12 and 13, according to banding patterns, might have generated our larger chromosome 2.

The idea of inheriting a double dose of a Robertsonian chromosome fueling human speciation isn’t new. I wrote about it in 2002 in The Scientist, wherein Lisa Schaffer, PhD, of “Paw Print Genomics” at Washington State University, Spokane, who at that time studied Robs, speculated, “With 1 in 1,000 individuals carrying a Robertsonian translocation, the likelihood of two carriers getting together and both transmitting their translocation is 1 in 4 million–so they are out there, just phenotypically normal.”

(I caught up with Dr. Schaffer this week, and she said that not too many people these days work with Robs. She and I fear that cytogenetics—the study of chromosomes and traits—is a dying art. It was my favorite part of graduate school. I learned how to glean meaning from chromosomes from one of the masters, corn geneticist Marcus Rhoades.)

The possibility of a new human species with 44 chromosomes can flesh out science fiction plots, if different sets of mutations accumulate in the two populations derived from the ancestral one. It may explain the origin of the bluish ghoulish subterranean Morlocks who eat the sun-loving, peaceful aboveground Eloi in H.G. Wells’ future world of The Time Machine, written in 1898. Or Robs may underlie the cannibalistic screeching humanoid “aberrations,” aka “Abbies,” our descendants, who will take over the future world depicted in last summer’s Wayward Pines.

Neither H. G. Wells nor Wayward Pines’ creator Blake Crouch evoked Robertsonian translocation as a plausible route to rapid human evolution (or devolution)—but they could have. Sci-fi author Greg Bear came very close in his marvelous 1999 and 2003 novels Darwin’s Radio and Darwin’s Children. He imagines that a latent retrovirus awakened in the genomes of pregnant women in 1999 shuffled the genomes of a new generation in ways that created cells with 52 chromosomes instead of 46, thereby instantly establishing a group that can successfully mate only among themselves. You’ll have to read the books to learn how and why the “virus children” are superior. Forced into camps by the fearful majority, they establish their own culture, further separating the two types of people, a little bit reminiscent of a presidential election in the US. Bear’s alternate reality is a compelling depiction of reproductive isolation leading, presumably, to speciation, with an initial chromosomal upheaval as the impetus.

I spoke to Bear back in 2004, again for The Scientist (a mechanism for the rapid extinction of a dedicated freelance writer is a change in editor-in-chief). Greg Bear is a self-taught scientist with a soaring imagination. Said he, “My secrets are few. I love biology. I have been researching it in constant reading since the early 1980s. I saw very clearly that DNA must be computational, a self-organizing, self-repairing system. In the early 90s, it became clear to me that modern evolutionary theory was incomplete. I set out to find all the out-of-the-way papers that I could to prove that nature was a network, from top to bottom.” The Darwin series arose from those thoughts—and he clearly knew about Robs.

I’m not very good at writing fiction and am in awe of people like Bear who can, but if I could, I’d follow up on this theme of 44-chromosome people arising by chromosomal happenstance and staying hidden in plain sight among those smugly having their genomes sequenced. Might social media catalyze such an event, which, after all, wasn’t around when the Time Machine or even Darwin’s Radio were written? Alas, Facebook’s Robertsonian Translocation Support Group, founded in 2011, only has 2 posts, the first of which evokes the Lord, probably turning off those seeking scientific information.

When I’m through with my next round of textbook revisions, maybe I’ll give fiction a shot … and honor what may be the dying biological art of cytogenetics.