The falling price of gasoline at the pumps may warm the hearts of consumers but it chills the souls of scientists who recognize that humankind must curtail the burning of fossil fuels to reduce the threat of climate change. Biofuels can help mitigate climate change and provide us with a sustainable source of transportation energy if yields and production costs are economically competitive. A major step towards achieving this goal has been achieved by researchers with the U.S. Department of Energy (DOE)’s Joint BioEnergy Institute (JBEI).

Led by Seema Singh and Blake Simmons, JBEI researchers have developed a “high-gravity” one-pot process for producing ethanol from cellulosic biomass that gives unprecedented yields while minimizing water use and waste disposal. The process utilizes a combination of ionic liquid pretreatment, enzymatic saccharification, and yeast fermentation for the production of concentrated fermentable sugars that result in high-titer cellulosic ethanol. “High gravity” means high biomass loading – the higher the biomass loading, the lower the costs for converting it to fuels.

“Our new one-pot process for making cellulosic ethanol was enabled by the discovery and use of a renewable ionic liquid derived from amino acids that commercially available enzyme mixtures and organisms can tolerate,” says Simmons, a chemical engineer who is JBEI’s Chief Science and Technology Officer and heads the institute’s Deconstruction Division. “This eliminates the need for separations, recoveries and other operational steps, generating significant cost savings.”

Ionic liquids are powerful solvents that can be used to deconstruct (dissolve) cellulosic biomass into sugars for the production of fuels. The renewable ionic liquid to which Simmons refers is one made from lignin and hemicellulose, two by-products of biofuel production from biorefineries. The discovery of the unique properties of this “bionic” liquid was also led by Singh and Simmons.

Details on this one-pot process for producing ethanol from cellulosic biomass have been reported in Energy and Environmental Science. The paper is titled “Transforming biomass conversion with ionic liquids: process intensification and the development of a high-gravity, one-pot process for the production of cellulosic ethanol.” In addition to Simmons and Singh, who is the corresponding author, other co-authors are Feng Xu, Jian Sun, Suryanarayana Konda, Jian Shi, Tanmoy Dutta and Corinne Scown. 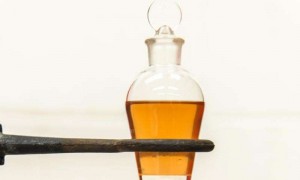 2015 was the hottest year on record for global average temperature, and marked the 19th straight year that average temperatures in the United States surpassed the average temperatures for the 20th century. The El Niño weather phenomenon is expected to make 2016 even hotter. A major contributor to this alarming trend is the burning of fossil fuels which continues to release nearly 9 billion metric tons of excess carbon into the atmosphere each year. With more than a billion tons of biomass produced annually in the United States alone, biofuels made from the cellulosic sugars in biomass have the potential to substantially reduce the use of fossil fuels.

“Our work with bionic liquids and one-pot fuel production processes can be a game-changing technology for biorefineries by overcoming several of the challenges these refineries currently face,” Simmons says. “The integration and consolidation of all of the major unit operations required for converting biomass into biofuels into a single vessel is a dramatic example of how impactful basic science can be to a very relevant process- engineering environment.”

Simmons and Singh believe that their one-pot process for producing cellulosic ethanol could also be applied to next generation or “advanced” biofuels, those that can be directly “dropped” into today’s gasoline engines and infrastructure. They are currently working with researchers in JBEI’s Fuels Synthesis Division to develop a microbial host capable of producing these advanced biofuels.

“While there is no other ionic liquid system on the planet right now that performs as effectively as ours, we still need to improve on increasing yields and developing a microbial organism that can consume all of the sugars present in the biomass,” Simmons says. “Then we need to develop a host microbe that can generate advanced drop-in biofuels in addition to ethanol.”